Making the announcement through a Press release, Eurovent said that within two months, the McHale Associates laboratory, in the United States and the 4JTECH testing laboratory, in Prague, Czech Republic, tested over 20 drift eliminators in accordance with ECC technical certification rules ECP 14-DE-2020 for laboratory drift testing and utilising the Isokinetic drift test code ATC-140. 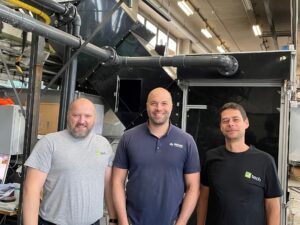 Eurovent said this challenge could not have been successfully met without the collaboration of McHale Associates, a Cooling Technology Institute (CTI) licence testing agency for drift eliminator testing, together with the newly developed 4JTECH laboratory, which had to undergo a series of validation tests supervised by Principal Performance Engineer, Gabe Ramos from McHale Associates, before being approved by the ECC programme committee.

According to Eurovent, the scope of Drift Eliminator certification programme was developed in 2009 by drift eliminator industry experts utilising a controlled laboratory environment to obtain a drift rate at specific controlled operating conditions for air velocity and water loading, as well as the drift breakthrough air velocity, which is the air velocity for which drift losses become visible at any point of the drift eliminator, expressed in m/s.

According to Eurovent, the certification programme is yet becoming an increasing requirement not only in Europe but also worldwide to ensure a significant reduction in hazardous emissions into the environment and to meet government standards, such as the French NF E 38-424, or incentive schemes, such as the LEED green building rating system.