Danfoss breaks ground for ‘supermarket of the future’

NORDBORG, Denmark, 14 April 2022: Engineering firm, Danfoss recently hosted a ground-breaking ceremony for the construction of what it described as one of the world’s most energy-efficient supermarkets.

Making the announcement through a Press release, Danfoss said the supermarket, scheduled to be ready in mid-2023 and spanning an area of 1,500 square metres, is situated next to Danfoss’ headquarters, in Nordborg, and is expected to lead the way for supermarket chains around the world to develop climate-friendly and sustainable stores with technologies that already exist today. 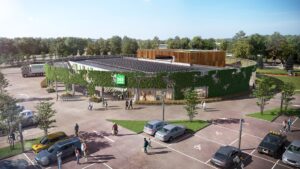 An artist’s rendering of the supermarket

Built with energy-efficient refrigeration and heating technology, solar roof panels and charging points for electric cars, the Smart Store supermarket will capture and reuse heat produced by cooling cabinets and freezers to provide heating for the supermarket and local community through district energy, Danfoss said.

The supermarket will be connected to the Nordals Fjernvarmeværk district heating plant and will be able to supply it with surplus heat, Danfoss added.

The cooling system in the new supermarket will also run on carbon dioxide, as a natural refrigerant, which helps to reduce the overall climate impact.

Kristian Strand, President, Refrigeration & A/C Controls, Danfoss Climate Solutions, said: “The origins of this project go back a long time, but the new energy-efficient Smart Store supermarket that we are starting to build today has only grown in relevance.

The goal of the project is to show how easy and profitable it is to decarbonise our economy and ensure reliable and sustainable energy use. Heating and cooling are the largest energy consumers in supermarkets. The solutions we are building here today represent the core of Danfoss solutions and will showcase how we can approach zero-energy use in food retail, together.”

According to Danfoss, the site will also serve as an Application Development Centre, where the company will work together with partners to co-develop new technologies and explore interfaces in the energy system surrounding energy storage.

Jürgen Fischer, President, Danfoss Climate Solutions, said: “The supermarket will be the focal point for a new part of our campus, where all buildings will be energy-efficient and meet special sustainability requirements. Our aim is to boost the green transition with concrete evidence of how far we can go with energy efficiency. We want to demonstrate to customers and partners how energy-saving solutions work in real life. We want to show the greenest energy is the energy we don’t use or reuse.”

According to Danfoss, BALS, Brugsen for Als and Sundeved, Denmark’s largest independent supermarket association, will rent the building from the company and install a COOP 365 discount supermarket. BALS, which works together with COOP, has a total of 13 stores in the area around Sønderborg in Denmark and, since 2015, has consistently reduced the consumption of energy in its stores. So far, it has cut 44% of its total CO2 emissions, Danfoss said, adding that it was, therefore, a natural next step that BALS became a partner in the project.

Danfoss said it is establishing a showroom in a part of the supermarket building, where all installations are visible to visitors and customers. It said visitors will be able to experience its solutions for heating and cooling, such as CO2 as a refrigerant, heat recovery and the interaction between installations, once the building is in operation. 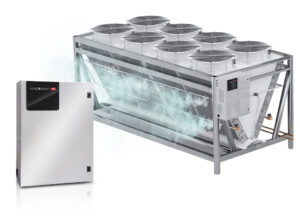