AHRI to participate in The Big 5 Dubai

AHRI said it will be available at Stand 4A191 in Hall 4, which will be open from 10am to 6pm, GST. It added that it was open to discussing its turnkey solutions for the regulatory and environmental issues most relevant to HVACR businesses and the wider industry. It added that it was keen on learning about the challenges HVACR industry players face in these areas, and on discussing solutions.

AHRI added that it would provide its AHRI MENA USB Toolkit, a comprehensive guide to the AHRI standards, certification, and other programs relevant to the region, to visitors. 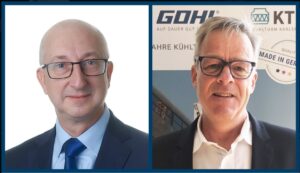 The Product Group, ‘Evaporative Cooling Equipment’ recently met in a fruitful online session, Eurovent said. The meeting included Chairman and Vice-Chairman elections, as well as redefinition of the group’s scope to include all hybrid and adiabatic technologies, it added. PG-CT is turning its attention to the review of Ecodesign Regulation for professional refrigeration (ENTR Lot 1), in which new efficiency requirements are being considered for process chillers connected to an evaporative condenser, it further added.

Stocker said: “With the review of the Ecodesign Regulation for professional refrigeration around the corner, we are facing a great opportunity to promote the energy saving potential of evaporative cooling technologies. By making the Eurovent voice heard in the review, we can support the EU to achieve its climate targets.”

Petiot added: “The European industry faces important challenges, regulations are getting stringent and Eurovent is instrumental in supporting the manufacturers. Our Product Group pledges to closely monitor the review process to ensure the highest energy efficiency requirements for Europe.”

According to Eurovent, PG-CT unites manufacturers of evaporative and adiabatic cooling equipment from around Europe and is supported by Eurovent Member Associations on a national level. Its main tasks consist of advocating on European level, developing Eurovent Recommendations, generally promoting the industry and export initiatives, and diminishing unfair trade barriers inside and outside Europe, it said. Manufacturers interested in joining PG-CT, it added, can get in touch with the Eurovent Secretariat via secretariat@eurovent.eu. 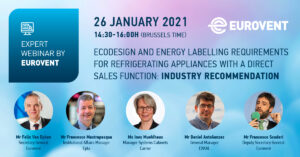 BRUSSELS, Belgium, 18 December 2020: Eurovent said it will be hosting a webinar on industry recommendation covering ecodesign and energy labelling requirements for refrigerating appliances with a direct sales function, on January 26. The webinar will take place from 2.30pm to 4pm on January 26, the association said, adding that speakers include members of the Eurovent Product Group, ‘Commercial Refrigeration Equipment’.

It said individual webinar topics will be followed by a moderated Q&A session, where participants would be invited to discuss any related issues.

According to Eurovent, key learning points of the webinar include:

Ecodesign and energy labelling requirements for refrigerating appliances with a direct sales function and EPREL, including products in the scope of the Regulations

According to Eurovent, interested participants can register via this link.

Italy’s relentless compliance with the European Union’s broader environmental targets is in the process of reshaping the HVACR sector in the country, with Andrea Guderzo, General Manager, Clivet Mideast FZCO, emphasising that the decarbonisation of the EU has created a new set of challenges and opportunities for the market in the country, as well as in the rest of Europe.

In agreement was Salah Eldeeb, AREA Export and Sales Manager, Castel, who says that there has been increasing demand for products that can accommodate new refrigerants with lower GWP in view of the F-Gas Regulation. “Everybody is focusing on these new regulations,” he says. “Within 2020, all HCFCs will be abandoned completely, so new projects and productions are going in with the new refrigerants.” Guderzo adds that the regulation has also led to a significant increase in the price of refrigerants and that those containing CFCs have already been withdrawn from circulation. “Today’s refrigerants may no longer be comparable with these, but their potential for harm cannot be ignored,” he says, emphasising that it is necessary to undertake step-by-step phase-down in refrigerants with a high-GWP.

Francesco Mastrapasqua, Marketing Manager, Refrigeration Systems, Epta, adds that the huge increase in price and the dramatic cut in the availability in the market, owing to F-Gas Regulation, has made every stakeholder consider very carefully the refrigerant for future applications. The market conditions created by these regulations, Guderzo says, has been driving innovation among HVACR manufacturers in Italy. As a temporary solution, he says, a number of producers are delivering units addressed to non-EU countries without refrigerants to cut down costs, which, he says, merely postpones the problem. However, Guderzo stresses that most producers are taking a more long-term approach by investing significantly in R&D to adopt new refrigerants, especially R-32, for small capacity units, which, he says is the same direction Clivet is taking. “Our company is facing the refrigerant challenge with great research and development work,” Guderzo says. “The first step is to adopt R32 refrigerant for units with inverter and scroll compressor for the medium- and low-capacity units. In the meantime, a joint task force involving the R&D units of Clivet and Midea, is developing new solutions using R1234ze refrigerant for high-capacity chillers. We are also studying to decrease overall the maximum quantity of refrigerant and the use of other low-GWP gases, especially for the medium-capacity chillers.”

The paradigm shift is especially palpable in the refrigeration sector, where Mastrapasqua says, natural refrigerants are being viewed as key to futureproofing equipment. “The refrigeration market in Italy is placing maximum importance on natural refrigeration solutions,” he says, adding that the company has, thus, ensured its scope of products offers a large variety of natural solutions. “The main technological trend and development have been for small-capacity systems; self-contained product adoption based on hydrocarbons, namely propane; and larger systems, which tend to be based on C02 for direct expansion market in Italy.” There has been strong determination in the market to adopt to this trend, he adds, as they are in accordance with F-Gas Regulation and Eco-Design Regulation. Mirko Travaglin, Marketing Manager Refrigeration – EMEA Region, Carel, seconds this, saying that in Europe, the use of natural refrigerants has mainly been implemented with trans-critical CO2 systems, which has, today, become a standard solution.

While the adoption of manufacturers is undeniable, Mastrapasqua says the main bottleneck for more widespread adoption is related to availability of skilled personnel that can ensure the performance and facilitate in the installation, commissioning and overall service of products with natural refrigerants. “There is still a need for training,” he says. “Despite all activities in place, the industry is still not coping with the demand. Still, competence and specific training is somehow a barrier in the adoption.”

Mastrapasqua says the industry, as a whole, has to work together to remedy this, in two aspects. “Aftersales service is one side,” he said. “On the other side is the need to provide simplified technology in our systems to fight against the very complexity of natural systems and provide the market with a product that eliminates all concerns.” Secondly, Mastrapasqua says the industry must take a more proactive stance towards training. Epta has made a move in this regard, with the recent inauguration of the Training Center for Refrigeration Experts, in Italy, which, the company says, is the only professional school in Italy to train future refrigeration technicians according to UNI EN 13313 and the first school in Europe, where a small store has been set up with trans-critical CO2 technology, made available by Epta. Costing over EUR 500,000 of investments and donations, the Training Center, the company says, was set up by the professional institute, ASLAM, together with the Assocold and Assofrigoristi associations, to address growing need for skilled expert to manage new natural refrigerants, which are the solutions of the future.

On the inauguration, Marco Nocivelli, Chairman and CEO of Epta and Chairman of Assocold, says: “Italy boasts a wealth of technical expertise in refrigeration and climate control. Passing that expertise on to young people will make a positive contribution towards increasing the success of the national system as a whole. The creation of the Institute bears tangible witness to our social commitment and our faith in the younger generations. It will allow them to achieve preparation of a high standard for a profession, which is increasingly in demand. The training is geared towards the future and will allow young people to become successful expert technicians that can provide effective responses to the challenges posed by constant technological progress, and by European and international regulations.”

Eldeep echoes the importance of proper training, saying that Castel, as an OEM provider, with 75% of its products compatible for refrigeration and only 25% going to air conditioning segment, is taking on a consultancy role to companies and providing assistance to develop products according to regulations. “We conduct a lot of seminars because of this, not only with the manufacturers but also with installers and maintenance,” he says. This, he says, has been especially vital, owing to the number of retrofits related to refrigerants. “In Italy,” he says, “new products and machines are going towards new refrigerants, but people have to know how they work. That is our role. We have to help them understand how it works and the difference between all the refrigerants for new technology and old technology.”

The need for skilled workforce, Matrapasqua says, is thoroughly recognised by the government, which has implemented a more stringent enforcement scheme for refrigerant management. “In Italy, we had the adoption of a new law, entering into force January of this year for the training and certification of equipment providers and refrigerant installation companies,” he says. “Contractors and services companies have to be certified to be allowed to perform any activity related to the refrigeration system. This is not new for our market in Italy. For several years, we have this requirement of certification; only, the process of training and certification is more strict, structured and more reinforced than ever before.”

The same law, Matrapasqua says, states that any official information related to operations performed on an F-Gas System will be downloaded in the country’s main database. “Whatever you do on an F-Gas system, whether you charge, adjust or check leakage of refrigeration, the details must be properly transmitted to the national database for a better control of these F-Gas refrigerants,” he says. “Laws and regulations on F-gas are more and more strict to ensure perfect control. If you choose natural refrigerants, there are less obligations and controls, so there is very strong discrimination in Italy. Of course, this drives the market to choose much easier refrigerants than F-Gas.”

Mastrapasqua believes that the narrative surrounding refrigerants in Europe is only the beginning of a trend that is already going global. “We believe the market is going to accept, more and more, natural refrigeration and CO2 systems, because they are the only sustainable solution for the future,” he says, with F-Gas, in Europe, and Kigali amendment, worldwide, driving forces in this direction.

Travaglin offers an example, as Carel, taking the key learnings from operations in Europe has released EmJ (Electronic Modulate Ejector) as the latest solution to allow trans-critical CO2 systems to work even in high-temperature climates. “In the Middle East,” he says, “close cooperation between Carel and the main OEMs in the region has created the opportunity to develop the first C02 supermarket, an UNIDO project in Amman, and a new supermarket in Masdar city in Abu Dhabi.”

Mastrapasqua says the industry is working towards making the system available and applicable globally. There will be a natural progression, more or less, everywhere in the world, he says. “Of course, at different times,” he admits, “but sooner or later, this is going to be accepted as the only solution.”