LINDAU ON LAKE CONSTANCE, Germany, 28 June 2021: ENGIE Refrigeration said it has redesigned its water-cooled QUANTUM chillers and is able to offer the series in a total of 47 versions with a performance range from 200 kilowatts to four megawatts.

Jochen Hornung, CEO, ENGIE Refrigeration, said: “We at ENGIE Refrigeration have always aimed to offer our customers the highest-quality, most efficient and most sustainable chillers. With the QUANTUM Water series we have once again achieved this goal; our models currently represent the most efficient water-cooled chiller series in the world. We are proud of this fact and are further consolidating our pioneering role on the international refrigeration market.” 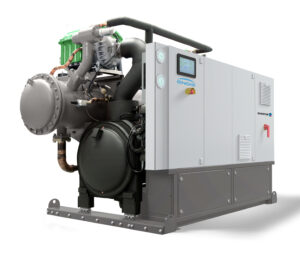 ENGIE said the revised QUANTUM Water meets the highest economic and ecological requirements for refrigeration supply. To achieve this, the company said, the team at ENGIE Refrigeration relied on new components and an innovative control concept. The team also deployed ultra-modern inner tube technology, which ensures an excellent heat transfer performance and an especially high level of efficiency with a low input of materials, the company claimed. In addition, the QUANTUM Water series is currently the only model series on the market with an open-flash economiser, integrated as standard in all 47 versions, which also helps improve performance and efficiency, the company further claimed. Moreover, operating companies benefit from control system options that are now even smarter, through adapting the tried-and-tested regulation strategy from the QUANTUM Air series to the water-cooled series and through deploying the latest Siemens PLC in control cabinets, the company added.

As a result, ENGIE said, QUANTUM Water chillers achieve even greater efficiency than their predecessor models, especially under partial load.

As the world’s first water-cooled chiller series, the QUANTUM Water offers groundbreaking digital features, ENGIE claimed. With the new ‘smart control’, a smart user interface replaces the touch panel that was previously integrated in a fixed position on the machine, allowing the chiller to be controlled using a tablet and a Wi-Fi connection, for example, the company said. This improves ease of use for operating companies while also simplifying maintenance and servicing, the company said. Furthermore, customers can now choose between four different refrigerants – R-515B, R-134a, R-513A and R-1234ze – and all machines require less refrigerant than the predecessor series, the company said. For the first time, the QUANTUM Water can be ordered with special housing to provide maximum safety in the unlikely event of an accident occurring in a machine operated with the A2L refrigerant R-1234ze, the company said. Customers who lack a large machine room but would nevertheless like to use future-proof high-end technology in their refrigeration supply can thus set up the new QUANTUM Water outdoors – a hitherto unheard-of option on the refrigeration market, the company said.

The QUANTUM Water is available in 47 model versions with a smart modular principle and a performance range from 200 kilowatts to four megawatts, the company said.

The new QUANTUM Water, ENGIE said, replaces the previous water-cooled series, QUANTUM W, QUANTUM B, QUANTUM X and QUANTUM G. The QUANTUM Power, it added, will remain available as a customer-specific solution for even higher performance ranges up to 8.5 megawatts.