JARAGUÁ DO SUL, Santa Catarina, Brazil, 7 July 2022: Motor manufacturer, WEG said it has supplied custom motors for the new smoke extractor product line from ECE Cogemacoustic, a global ventilation expert based in France. Making the announcement through a Press release, WEG said it has engineered a customised version of the W22 motor to ensure the ECE Cogemacoustic equipment can preserve air quality in public environments in the event of a fire.

According to WEG, the new W22 motor is designed specifically for this market segment, and is able to work in extreme conditions. The motor can guarantee an effective and reliable operation in a temperature up to 400 degrees C during a two-hour time frame, while operating in accordance with international standards, the company claimed.

The line of motors has several optional features, such as the possibility of supplying the terminal boxes loose connected to the motor through flying leads, or supplying the motor without a fan or fan cover, in order to make the product even more compact, WEG said.

According to WEG, the creation of the customised motor came as a result of a partnership between WEG Portugal and ECE Cogemacoustic, facilitated by WEG group subsidiary, WEG France. WEG Portugal manufactures smoke extraction motors for the European market at its facility in Porto, and specialises in this particular range, the company said.

“Particularly in the event of fire, these products are intended to operate mostly on subways and tunnels,” said Patricia Guedes, Head of Marketing and Communication, WEG Portugal, registered as WEGeuro Indústria Eléctrica. “These motors are essential to ensure the proper operation on high temperature environments, contributing to the safety of people and preservation of the air quality.

“Our supply meets the customer project requirements for this demanding market segment, which strives [for] a very high degree of security and reliability. Once more, this achievement proves WEG’s expertise in supplying customized solutions to major worldwide projects.”

BRUSSELS, Belgium, ZÜRICH, Switzerland, 1 March 2022: Eurovent said ABB has joined as its newest Corresponding Member, adding that the Eurovent Board of Directors approved the membership of the manufacturer of HVACR drives, motors and controls during a meeting in February 2022.

According to Eurovent, ABB is one of the global manufacturers of drives, motors and controls for HVACR applications with a global footprint, supporting the industry across the world with products and services.

Frank Taaning Grundholm, Vice President of Global HVACR Sales, ABB, who also serves as a Board member of Eurovent and Eurovent Middle East, said: “To get the most out of an HVACR system requires smart planning, and the most critical focus for building operators is to move towards specifying needs rather than technical solutions only. We are excited to be part of Eurovent and look forward to taking even more active part in its dialogues that are guiding the development of HVACR products in a more sustainable direction and leading important advocacy for improved Indoor Air Quality.”

KÜNZELSAU, Baden-Wurttemberg, Germany, 4 August 2021: “The world’s markets will continue to need high-quality electric motors and fans in the future,” said Peter Fenkl, CEO, Ziehl-Abegg, explaining why the company invested €16 million euros in the expansion of its production buildings at the Kupferzell site in the middle of the pandemic. This, he added, will be followed by a further €20 million for machinery. Dr Nicole Hoffmeister-Kraut, Minister of Economic Affairs, Baden-Württemberg, added: “With the new building, the company is further expanding its high degree of vertical manufacture and the resilience of the supply chains here at the site, whilst also securing valuable jobs both within and beyond the region.” 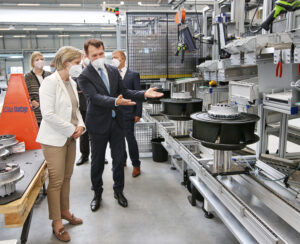 Fenkl described how, in the early summer of 2020, many economic decision-makers were in shock due to the pandemic. “No-one knew what was coming next – and that’s when we started our current construction project,” he recalled. “The year 2020 resembled a rollercoaster ride – rapidly alternating between border closures, interruptions to material supplies, falling sales and rising orders. Thanks to the commitment of each and every one of the employees, the company still succeeded in posting an increase in sales at the end of the year – followed by an order intake that exceeded all previous records.”

Referring to the new building, he said, “So we’re now glad that we’ve already created more space for rapid growth.” New machines and systems that had already been ordered in spring 2020, will be arriving on a weekly basis, he said, adding that the building is also intended to create an additional 180 jobs.

The new building will result in an additional 8,700 square metres for manufacturing state-of-the-art generation of energy-efficient electric motors, the company said. “The durable and efficient electric motor has been our core area of expertise for more than 100 years,” Fenkl said, adding that the company is a technology leader in the design of fans based on the concept of biomimetics. “However, since many geometries offering perfect aerodynamics cannot be implemented in steel or aluminum, we are expanding the area of composite materials,” he said. “It is essential for us to have more space for additional injection-moulding machines for composite materials.”

Ziehl-Abegg, he said, is expanding its production facilities worldwide or optimising existing plants – in Schöntal-Bieringen, where the aluminium casting operation is based, and in America and Asia. “Corona,” he said, “has shown that we have to consider very carefully how we can design our production facilities in a way that enables us to satisfy the needs of the market to optimum effect.”

ARLINGTON HEIGHTS, Illinois, 2 August 2021: AMCA International introduced tools to aid transition to the Fan Energy Index. The body did so against the backdrop of recent developments related to energy efficiency in the United States.

On July 28, the US Department of Energy (DOE) issued determinations that the 2019 edition of ANSI/ASHRAE/IES 90.1, Energy Standard for Buildings Except Low-Rise Residential Buildings, and the 2021 edition of the International Energy Conservation Code (IECC) “will achieve greater energy efficiency in buildings subject to the code” and “will improve energy efficiency in residential buildings,” respectively. Upon publication of these affirmative determinations, the DOE said, states in the country must review and certify their building codes relative to ANSI/ASHRAE/IES 90.1-2019 and the 2021 IECC.

As states begin to examine and update their energy codes, some are adopting an earlier edition of ANSI/ASHRAE/IES 90.1 (2016 or 2013) or the IECC (2018 or 2015), AMCA said. In so doing, they are prolonging the use of fan efficiency grade (FEG) as the metric for efficiency provisions for commercial and industrial fans and blowers, AMCA said. FEG, which the DOE concluded in an as-yet-unfinished rulemaking is not an appropriate metric for a federal appliance/equipment regulation, was replaced by Fan Energy Index (FEI) for ANSI/ASHRAE/IES 90.1-2019 and the 2021 IECC, AMCA said, adding that it advises states adopting earlier editions of ANSI/ASHRAE/IES 90.1 and the IECC to “leapfrog” the outdated FEG metric to take advantage of the energy-saving, compliance-easing FEI.

For example, Florida, which on December 31 became the first state to adopt FEI when the seventh (2020) edition of Florida Building Code: Energy Conservation was published, adopted the 2018 IECC, but the 2021 IECC fan-efficiency provision, AMCA pointed out.

“Florida has set the example of how to leapfrog model-energy-code provisions to avoid prolonging the use of an outdated metric,” Aaron Gunzner, Senior Manager, Advocacy, AMCA International, said. “To help other states achieve the goal of phasing in the new FEI metric, AMCA International has, with permission from ASHRAE and the International Code Council, developed templates with exact strike-out/underline language.”

Additionally, to describe the rationale for and the benefits of changing metrics, AMCA said it recently updated its Advocacy Brief: New Fan Energy Index (FEI) Metric and Scope for Energy Codes, a document for code officials and others considering proposals to transition from FEG to FEI.

Formalized in ANSI/AMCA Standard 208-18, Calculation of the Fan Energy Index, FEI considers the effects of motors and drives, not just fans, and aids the right-sizing of fan systems for the conditions they will operate in, AMCA said. In addition to ANSI/ASHRAE/IES 90.1-2019 and the 2021 IECC, it added, FEI has replaced FEG in: