ARLINGTON, Virginia, 13 April 2021: The Air Conditioning, Heating, and Refrigeration institute (AHRI) today joined more than 35 other industry and environmental organizations in petitioning the U.S. Environmental Protection Agency (EPA) seeking uniform national standards for stationary air conditioning and commercial refrigeration equipment in the transition to climate-friendly refrigerants under the American Innovation and Manufacturing (AIM) Act. If promulgated, these standards will result in an additional half billion tons of CO2 reduction, over and above what already is projected to be achieved by implementation of the AIM Act, AHRI said through a Press release.

For new residential and light-commercial central air conditioning equipment, the petition, AHRI said, seeks a regulation requiring that equipment manufacturers use refrigerants with a global warming potential (GWP) of 750 or less in equipment made after January 1, 2025, with the exception of variable refrigerant flow (VRF) equipment, whose deadline would be January 1, 2026. These transition dates would align the country with the dates adopted in December 2020 by the California Air Resources Board (CARB) and nine additional Climate Alliance states, AHRI said.

For commercial refrigeration and chiller equipment, the petition seeks the GWP limits and transition dates according to the table below:

Through these petitions, AHRI said, a broad variety of stakeholders, including itself, hope to demonstrate that sufficient consensus already exists and that a regular notice and comment rulemaking would adequately represent all material interests, thereby allowing the agency to forego the negotiated rulemaking process it must consider – but is not required to undertake – for such petitions, pursuant to the AIM Act.

AHRI said its petition emphasizes that as a general matter, “the U.S. HVACR industry already is proceeding with the requested transition date as its goal; granting this petition provides order and structure to the market and streamlines industry preparation”.

The transition dates contained in its petition, AHRI said, allow “sufficient time for careful planning and preparation, both to avoid excessive costs that can unduly burden consumers, and to ensure all safety and other associated standards can be met”, according to the petition. “For example, contractors and technicians must receive appropriate training, state and local building codes must be updated and changed, and supply chains and distribution networks must be modified,” AHRI said.

“While AHRI has long believed that an earlier transition would not allow enough time for manufacturers to prepare, we have been equally clear that a later transition date would put long-term compliance with the AIM Act at risk,” said Stephen Yurek, AHRI President & CEO. “Aligning these dates also reduces costs for consumers and ensures long-term availability of energy-, environment-, and life-saving refrigerants for climate control and for the cold chain for food, vaccines, and other medicines.”

AHRI, the U.S. Department of Energy, CARB and other stakeholders have invested more than USD 7 million in research into alternative refrigerants in preparation for this transition, AHRI said, These more climate-friendly alternatives, it added, are in use today in Europe, Australia, Japan, Thailand and in more than 90% of new passenger vehicles currently sold in the United States.

LINDAU ON LAKE CONSTANCE, GERMANY, 23 February 2021: ENGIE Refrigeration has added a new refrigerant to its portfolio. R-515B is now available for QUANTUM chillers as an alternative to R-1234ze, it said. R-515B is eco-friendly, non-toxic and non-combustible and, thus, especially safe, it said. With the introduction of the new refrigerant, the company said it is setting a clear example for more sustainability.

R-515B is available for QUANTUM models as an alternative to R-1234ze. Source: ENGIE Refrigeration

ENGIE said it is one of the first manufacturers in the world to use the refrigerant R-515B. It was developed as an alternative to R-134a and can be used instead of R-1234ze in the form of a drop-in refrigerant, it added. “Refrigerant R-515B combines the positive properties of a 77% lower greenhouse potential than R-134a with a classification as safety level A1 according to EN 378-1,” Daniel Keller, Head of Product Management, ENGIE Refrigeration, said. “This means that unlike R-1234ze (A2L), it is considered a non-combustible safety refrigerant.”

R-515B is an azeotropic mixture, 91.9% R-1234ze and 8.9% R-227ea, ENGIE said. With a GWP value of 293 (IPCC-AR4*) and 299 (IPCC-AR5**), R-515B meets the requirements of the F-Gas Regulation – until at least 2030, the company said. Another important advantage for companies operating existing machines run on R-134a is that because R-515B is classified as A1, no additional safety measures need to be taken for the machine room containing the chiller or heat pump, the company said.

From February 2021, the air-cooled, water-cooled and split models of the QUANTUM series are available with R-515B as an alternative to the previous standard refrigerant, R-1234ze, ENGIE said. “With the new refrigerant, R-515B, the chiller achieves almost the same refrigeration capacity and energy efficiency as with R-1234ze,” Keller said. “This means that R-515B is suitable for customers from all industries that require optimal refrigeration capacity and also wish to switch to an eco-friendly and sustainable refrigerant. 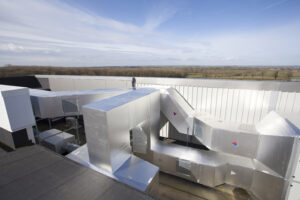 DUBAI, UAE, 5 January 2021: Kingspan Insulation launched the KDuct, which the company described in a Press release as catering to external ductwork applications.

According to the company, the KDuct incorporates its pre-clad ductwork system, made of thermoset, fibre-free pre-insulated duct board with a heavy-duty outer jacket. The company described the product as ideal for external applications, plantrooms, risers, congested spaces and lightweight specifications. The KDuct, Kingspan claimed, offers high performance, rigid, closed-cell insulation core, manufactured with a blowing agent with zero Ozone Depleting Potential (ODP) and low Global Warming Potential (GWP). At the same time, it said, the panels are faced on both sides with an embossed aluminium foil. The new product line would provide ultra-strength and rigidness; cost-savings over traditional exterior ductwork; extra-low air leakage, which does not allow conditioned air to escape; and high-compressive strength, among several other benefits, the company said.

Sarmad Fakhri, Managing Director, Kingspan Insulation, said, “KDuct Ductwork system would help our customers to save extra cost and time due to its lightweight and single-fix properties.” Unlike the traditional approach to ductwork construction, which requires sections to be lagged with insulation, once installed, the KDuct panels are pre-insulated with a high-performance insulation core, the company said. This single-fix and lightweight design, the company added, reduces installation time and transfers the cost benefits to the building owners.