JCI: Investments in sustainability have rebounded to pre-pandemic levels 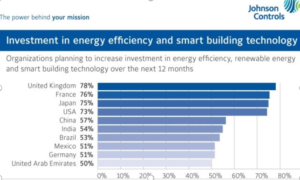 “In the face of the multiple and continuous shock waves of the last two years, it is very encouraging to see that building owners and operators are driving forward the kinds of investments that deliver the resilience needed to grow their business and attract and retain the best talent,” said Katie McGinty, Vice President & Chief Sustainability and External Relations Officer, JCI.

“Whether it is the damage delivered by climate-charged destructive natural events, or the health threat of the pandemic, or now, the stark demonstration of the insecurity of world energy supplies, it is clear that taking action to cut energy demand while decarbonizing and cleaning the air are core strategies for companies, governments and institutions to not only survive but to thrive.

Our innovative technologies in heat pumps and our OpenBlue digital platform, plus our Net Zero as a Service partnership offering, are exactly the right tools at the right time for leaders determined to stay well ahead of challenges and deliver new opportunities for their business or organization.”

JCI said the survey revealed that planned investment in energy generation or storage has grown significantly over five years, likely in response to the global focus on decarbonization, and as part of that effort, electrification.

Compared to its global counterparts, significantly more respondents in the United States plan to implement measures, such as building controls improvements, onsite renewable energy and energy management process, such as ISO 50001, JCI said. Of the countries surveyed, the United Kingdom, France and Japan have the most respondents who expect to increase investment in energy efficiency, renewable energy or smart building technology over the next year, the company said. Still, to reach global sustainability and environmental goals, the world must work collectively to plan for a more energy efficient future and make investments today for the generations to come, it added.

Although global-scale transformation is necessary to course-correct on climate change, organisations are facing barriers to pursuing sustainability initiatives, JCI said. Almost half of the respondents surveyed say their top barrier to pursue energy and building technology improvements is either a lack of funding to pay for improvements (25%) or uncertainty in their return-on-investment (23%), the company said.

Additionally, more than half of respondents pointed to a lack of technology as one of the hindrances to scaling sustainability efforts, JCI said.

The pandemic has also prompted organizations to rethink their technology investment decision-making, JCI said. Protecting the health and safety of building occupants during the coronavirus pandemic was the second most significant driver of investments globally, it said. Additionally, 65% of respondents performed an indoor air quality assessment last year, it added.

Respondents to the survey also said improving occupant health and wellness overall and improving life safety and security were important decision-making factors, JCI pointed out. Over the next 12 months, almost 60% of organizations plan to invest in fire and life safety system and security system improvements to their buildings, it said. Long term, more than two-thirds of organizations believe data analytics and cybersecurity will have an extremely or very significant impact on the implementation of smart buildings over the next five years, it added.