At the Annual Meeting of the EIB Board of Governors, taking place in Luxembourg, EIB President Werner Hoyer confirmed details of the EIB Group’s record EUR 95 billion financing last year, including an unprecedented response to mitigate the impact of the COVID-19 crisis.

Hoyer also confirmed the EIB’s largest ever support for climate action and environmental sustainability and the successful launch of EIB Global to strengthen development finance outside Europe.

Hoyer said: “I am grateful to the EU Bank’s Governors for their support and endorsement of the EIB Group’s work over the past year. Today’s discussion confirmed the importance of our work in support of EU policies around the world. The EIB Group has been part of the European Union’s response to every crisis over the last decade, from climate to energy security, the financial crisis, the COVID pandemic and, most recently, Russia’s brutal invasion of Ukraine. The commitment and professionalism of EIB and EIF colleagues will continue to assist us as we tackle the challenges ahead. These are all connected: War in Ukraine is the strongest argument in favour of accelerating investment in green energy, to make Europe less dependent from imported fossil fuels. Global partnerships are key to winning the fight against global heating. And the Governors’ support has been crucial in setting up EIB Global, our development and partnership arm, working with other institutions in a genuine and effective “Team Europe” spirit. And last but not least, the EIB’s strong investment in innovation will help ensure we develop new tools capable of resolving the problems created by yesterday’s technology.

“I wish to thank Minister Annika Saarikko for her deft and sure-handed year at the helm of our Board of Governors, and it is a huge pleasure to welcome our new Chairman, Minister Mikael Damberg.”

The European Investment Bank Board of Governors comprises the 27 European Union finance and economy ministers and was chaired by Saarikko, Minister for Finance of Finland.

Last year, EUR 27.6 billion of EIB financing supported climate action and environmental sustainability, representing 51% of EIB business. Hoyer confirmed that the EIB is currently scaling up support for climate action in developing countries most vulnerable to a changing and more extreme climate. During today’s meeting, Hoyer highlighted how the successful launch of the EIB’s new dedicated development branch, EIB Global, earlier this year, was enhancing the impact of renewable energy, clean transport, water, health, food security and business investment in the Balkans, Africa, Asia, Latin America and the Pacific.

The Luxembourg based European Investment Bank is the world’s largest international public bank. 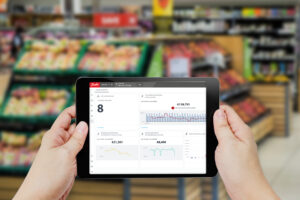 NORDBORG, Denmark, 21, January 2021: Danfoss said it has strengthened its Alsense IoT services with a holistic store-level software suite, moving store maintenance from reactive to proactive. Making the announcement through a Press release, the company said the technology enables food retailers to prioritise and reduce their maintenance efforts across stores and critical events. It added that the software solution was originally developed by Honeywell.

“We are thrilled to welcome the Smart Refrigeration Solution and incorporate it into our Alsense cloud-based services,” said Jürgen Fischer, President, Danfoss Cooling Segment. “We are now putting predictive maintenance into action, allowing the food retail industry to prevent unplanned cooling system downtime and inefficiencies in energy consumption.”

According to Danfoss, Alsense provides food retail professionals with transparency and executive overviews of refrigeration assets and energy efficiency at chain level. Going forward, the combined Alsense offering will enable managers to easily benchmark and prioritise efforts across stores to save time and optimise the impact of their maintenance spend, Danfoss said. Further, Alsense will provide service technicians with a prioritised action plan, empowering them to immediately address equipment performance and operating concerns upon arrival at a store, Danfoss added.

Chris LaPietra, Vice President and General Manager, Honeywell Stationary Refrigerants, said, “The Smart Refrigeration Solution software was developed based on customer requirements gathered from leading food retailers, who were looking to save money by reducing energy spend and improving performance of their refrigeration system.”

According to Danfoss, the step follows the launch of its Alsense IoT platform in October 2020 and will accelerate its efforts in providing food retail professionals with intuitive software tools and data-driven, expert-enabled insights to optimise operational efficiency, refrigeration asset performance and energy efficiency.