The Secretariat said it will partner with seven organisations to make students and young professionals globally aware of career opportunities in fields relying on refrigeration technology.

By way of listing the issues expected to come up for discussion in June, the Secretariat posed the following questions: Who researches how food can be preserved from its source to the table and how vaccines and medicines can be shipped around the world? Who enables data centres to function? How can climate change be stabilised while not sacrificing modern convenience? Who safely manages the processes that enable air to be cooled? How can the quality of indoor air be improved, and disease transmission prevented?

The people, “cooling champions,” and the careers that make modern life possible will be spotlighted in “cool careers” webinars over two weeks in June, the Secretariat said.

Organised as part of the day’s 2021 campaign theme, “Cooling Champions: Cool Careers for a Better World”, the webinars will be conducted by groups whose networks reach into developed and developing nations, the Secretariat said. Campaign partners are UNEP OzonAction, ASHRAE, EPEE, FAIAR, IIR, ISHRAE and U-3ARC, it added. The objective is to inspire students and those early in their career path to join the more than 15 million people worldwide currently employed in the refrigeration sector, making the world better, it further added.

“Partnering with these organizations enables the refrigeration industry to reach out globally, with particular emphasis on developing countries, to expand the workforce that supports life-giving and society-dependent technologies,” said Steve Gill, Founder & Head, World Refrigeration Day Secretariat. “Opportunities within the industry abound for young people with a wide range of career aspirations. Advanced cooling technologies provide them with a profession that improves life in their communities and in the world as a whole.”

According to the Secretariat, each campaign partner will target career opportunities with webinars in the language common within that network. Special emphasis will be given to sectors that are commonly less known, like Cold Chain, Refrigerant Management, Indoor Air-Quality, Sustainability, Heat Pumps, and Not-in-Kind Technologies. Gender equality and promoting women in cooling careers will be highlighted in this year’s campaign as well, it said, adding that the schedule of webinars and topics will be available in the coming weeks at www.worldrefrigerationday.org. 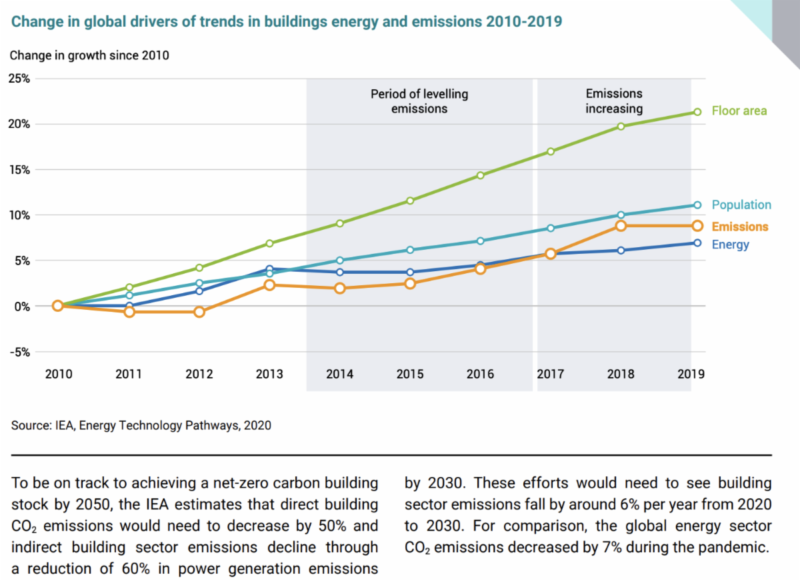 NAIROBI, Kenya, 17 December 2020: Emissions from the operation of buildings hit their highest-ever level in 2019, moving the sector further away from fulfilling its huge potential to slow climate change and contribute significantly to the goals of the Paris Agreement, according to a new report released on December 16.

However, pandemic recovery packages provide an opportunity to push deep building renovation and performance standards for newly constructed buildings, and rapidly cut emissions. The forthcoming updating of climate pledges under the Paris Agreement – known as nationally determined contributions, or NDCs – also offer an opportunity to sharpen existing measures and include new commitments on the buildings and construction sector.

The 2020 Global Status Report for Buildings and Construction, from the Global Alliance for Buildings and Construction (GlobalABC), found that while global building energy consumption remained steady, year-on-year, energy-related CO2 emissions increased to 9.95 GtCO2 in 2019. This increase was due to a shift away from the direct use of coal, oil and traditional biomass towards electricity, which had a higher carbon content due to the high proportion of fossil fuels used in generation.

When adding emissions from the building construction industry on top of operational emissions, the sector accounted for 38% of total global energy-related CO2 emissions.

“Rising emissions in the buildings and construction sector emphasize the urgent need for a triple strategy to aggressively reduce energy demand in the built environment, decarbonize the power sector and implement materials strategies that reduce lifecycle carbon emissions,” said Inger Andersen, Executive Director of the UN Environment Programme (UNEP). “Green recovery packages can provide the spark that will get us moving rapidly in the right direction. Moving the buildings and construction sector onto a low-carbon pathway will slow climate change and deliver strong economic recovery benefits, so it should be a clear priority for all governments.”

Worryingly, the GlobalABC’s new Buildings Climate Tracker – which considers measures, such as incremental energy efficiency investment in buildings and the share of renewable energy in global buildings – finds that the rate of annual improvement is decreasing. It, in fact, halved between 2016 and 2019. To get the buildings sector on track to achieving net-zero-carbon by 2050, all actors across the buildings value chain need to increase decarbonization actions and their impact by a factor of five.

Even though progress in efficiency efforts has not kept up with an increase in sectoral growth, there are positive signs and opportunities to catch up on climate action, the report finds.

The recent Emissions Gap Report 2020 from the UN Environment Programme (UNEP) found that a green pandemic recovery could cut up to 25% off predicted 2030 greenhouse gas emissions and bring the world closer to meeting the 2 degrees C goal of the Paris Agreement on Climate Change; much more needs to be done to get to the 1.5 degrees C goal, though.

While construction activities have dropped by 20-30% in 2020 compared to 2019 as a result of the pandemic and around 10% of overall jobs have been lost or are at risk across the building construction sector, stimulus programmes for the building and construction sector can create jobs, boost economic activity and activate local value chains. Under its Sustainable Recovery Plan, the IEA estimates that up to 30 jobs in manufacturing and construction would be created for every million dollars invested in retrofits or efficiency measures in new builds.

“Buildings are a strategic sector to simultaneously address various global challenges, such as climate change, the economic crisis resulting from the COVID-19 pandemic, [and the need to] improve living conditions and the resilience of our cities. For Mexico, the implementation of mitigation measures that improve the thermal and energy performance of buildings is a key ingredient for sustainability,” said Sergio Israel Mendoza, General Director of Environmental, Urban and Tourism Promotion, Mexico’s Secretariat of Environment and Natural Resources (SEMARNAT).

“We urgently need to address carbon emissions from buildings and construction, which constitute almost 40% of global carbon emissions,” said Nigel Topping, United Kingdom High-Level Climate Champion. “We must give governments visibility of this at COP26 to inspire policies and decisions that result in the significant decarbonisation of this sector. We need to challenge the incumbency of steel and concrete. Whether or not zero carbon steel and concrete become the materials of the future will depend on how fast those industries innovate in the face of new and disruptive technologies. We have some far-reaching commitments under the Science-Based Targets Initiative by leading materials companies, which can serve as examples pushing the industry to go further, together.”

In 2019, spending on energy-efficient buildings increased for the first time in three years, with building energy efficiency across global markets increasing to USD 152 billion in 2019, three per cent more than the previous year.

This is only a small proportion of the USD 5.8 trillion spent in total in the building and construction sector, but there are positive signs across the investment sector that building decarbonization and energy efficiency are taking hold in investment strategies.

For example, of the 1,005 real estate companies, developers, REITS, and funds representing more than USD 4.1 trillion in assets under management that reported to The Global ESG Benchmark for Real Assets in 2019, 90% aligned their projects with green building rating standards for construction and operations.

Green buildings represent one of the biggest global investment opportunities of the next decade, estimated by the IFC to be USD 24.7 trillion by 2030.

Aside from calling for a green recovery, post-pandemic, and updated NDCs, the report recommends that owners and businesses use science-based targets to guide actions and engage with stakeholders across the building design, construction, operation and users to develop partnerships and build capacity. Investors should reevaluate all real estate investment through an energy-efficiency and carbon reduction lens.

Other actors across the value chain should adopt circular economy concepts to reduce the demand for construction materials and lower embodied carbon and adopting nature-based solutions that enhance building resilience.