HANGZHOU, Zhejiang, China, 12 April 2022: Dunli introduced X-Pro axial fans, which it described as equipped with the latest rear guide vane and three-dimensional flow impeller. They are ideal for HVAC and refrigeration applications, the company added.

Making the announcement through a Press release, Dunli said the fans come in a wide range of impeller diameters, including 500mm, 630mm, 710mm, 800mm and 900mm. The maximum static pressure efficiency is up to 56%, and air volume is as high as 35,000m3/h, the company said.

In terms of noise control and range – throw distance – they perform significantly better than equivalent fans in the motor fan industry the world over, the company claimed.

Highlighting what it called the energy-saving characteristic of the fans, Dunli said an 800mm X-Pro axial fan working at 13,500m3/h at 160Pa, can save more than 17,000 kilowatt-hours in five years, compared to traditional equivalent fans in the market.

The fans can be used in a variety of HVAC equipment, such as air coolers, air-cooled heat exchange modules, heat pumps and cooling towers, Dunli said, adding that they are reliable, easy to install and maintain and convenient to control. 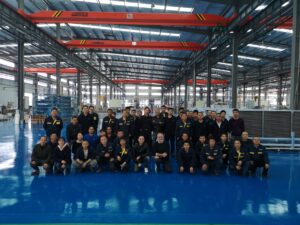 Ten air conditioners will be sold per second in the next 30 years, says Moan Abraham, Vice President and General Manager for Air Conditioning, Hisense Middle East, quoting a key figure in the International Energy Agency’s “The Future of Cooling” report. The report forecasted that the global air conditioner market will grow from 1.6 billion to 5.6 billion by 2050. For Abraham, while the figure offers tremendous potential, it also poses a challenge for HVAC manufacturers, stressing that if the industry does not opt for energy-efficient systems from now on, the scenario in 2050 could be quite challenging with regard to heavy consumption. Abraham believes Chinese manufacturers could be well positioned to address this growing demand, with regard to both scale and energy efficiency.

Based on customs data published by the Chinese government, Abraham says that China is already taking a big portion of the air conditioning business, globally and that the number continues to grow for all major players. Mark Wang, General Manager of International Sales, Chigo, says the overall growth of China’s HVAC industry is expected to be around five per cent. Abraham says that Hisense alone has been able to increase its export shares by 50% in the last three years.

To further underscore the scale of Chinese exports, Abraham says that in 2018 alone, around 50 million sets were exported from China. In 2019, Abraham says, it is expected that 4.14 million units will be exported to the Middle East, and 3.19 million units to Africa. “If China is exporting [around] 50 million sets, and the Middle East and Africa is taking around 7.5 million sets, that’s a significant portion that the region is accounting for,” he says.

Abraham says that the Middle East and African markets have been showcasing greater appreciation for Chinese brands. Gleaning from Hisense’s own experience in the region, Abraham says that in the past, the company was largely an OEM player but that since it has been focusing on its own brand, Hisense has achieved a good market share in the last 3-4 years. This, Abraham says, is owing to several reasons. First, he points to the gradual shift in public opinion. “The quality perception of China-made products have changed today,” he says. “You have government entities specifying China-made products – this means confidence. Basically, the quality and performance of Chinese ACs and brands have been quite high-end in the last few years. People are now recognising that the quality is next to none.” Secondly, Abraham points to affordability owing to economies of scale. “It’s not about buying low-cost products,” he says. “The product is more affordable, so people can buy. Again, the purchasing power increases and the affordability has come.” Abraham also points to reliability, stressing that Chinese brands’ move to partner with notable local companies has enhanced after-sales and maintenance services. Lastly, Abraham stresses that China has the capability to manufacture in big volumes, which allows it to remain competitive in big markets.

Abraham says that this offers a good opportunity for Chinese brands, as the demand will continue to grow, not only globally, as per forecasts, but in the region, as well, owing to a reduction in lifecycle of air conditioners, especially in residential applications. This, he says, can be attributed to three main factors: “Number one, it is exposed to harsh environments. The AC is taking a big beating in terms of performance. Also, usage – people are looking for extreme cooling.” In this regard, Abraham says there is a need to enhance consumer awareness with regard to moderate temperatures setting. “People want a set-point temperature of 16 degrees C,” he says. “This is bad for health and energy consumption. Some countries are putting some regulations, especially in Egypt, which limited thermostat setting to 20 degrees C. If regulation comes, you need to limit temperature setting to a certain level, and you can increase the efficiency   and life of ACs.”

Another cause for the reduction in life of air conditioners, Abraham says, is the lack of skilled personnel handling the maintenance of AC equipment in residential units. The third bottleneck, Abraham says, is the cost of repair as well as the response time of relevant personnel in the event there is a need for product replacements. “In peak season in the GCC region, a new air conditioner can be installed in 24 hours,” he says. “But if you have complaint relating to compressor failure, you may have to wait for 2-3 days.”

Chinese manufacturers are showing increasing interest in Middle East and Africa; however, it is not solely owing to the potential pipeline of projects. The growing importance the countries in the region is placing on energy efficiency has also piqued the interest of Chinese brands, which have become well-versed in navigating increasingly stringent regulations in China. Abraham says that in China, the government has cracked down on the supply chain of components to ensure that products meet certain environmental standards in view of the country’s commitment to the Paris Accord, leading to a spike in cost of products, as companies need to maintain certain standards of production. Sharing his observations on trends in China, Wang adds that the VRF market is also continuing to grow at good rate, and the proportion of VRFs, compared to conventional systems, will increase. Abraham echoes this, saying that in China, VRF systems are being sold in the market like a consumer product and that there are quality training systems for those entering the service industry.

A number of Chinese companies are leveraging this experience to address shifting standards in the region. Wang says: “With the enactment of Saudi Arabia’s new SASO energy efficiency standard, Bahrain and Oman have successively issued energy efficiency regulations similar to SASO. Kuwait has also raised the T4 energy efficiency standard that is expected to be implemented in September 2019.” As customers pay more and more attention to energy saving, Wang says, designers and consultants will also take this aspect into consideration when selecting air-conditioning systems, especially in green projects and government tenders. “The technical threshold of products is the basic requirement,” Wang says. “We are actively responding by the timely launch of related products.”

Wang says that in addition to key markets, such as Saudi Arabia, Chigo is committed towards reinforcing its presence in markets such as Syria, Palestine and, particularly, Iraq. “The political situation in Iraq from 2017 to 2018 has gradually stabilised and reconstruction has started,” he says. Wang adds that although there are challenges in the country, it will not be enough to stall the momentum the Iraqi market is undergoing, adding that the local market is evolving into a promising VRF market. Abraham echoes this, saying that as Iraq continues to develop an increasingly stable government, it will look to provide its citizens with basic services that will require further infrastructure, such as housing. “Those will be good drivers for most of the suppliers,” Abraham says. “If you look at Iraq today, 95% of what is imported is from China, and Iraq is a tough environment in terms of climate, so quality should be at the high end in order to gain the market in Iraq.”

Abraham says that for the most part, the Iraq market provides an even playing field for most suppliers, but that the differentiating factor is the partner of choice. “Local partner distributors’ knowledge in the market and relationships will play an important part in the development,” he says.

Speaking with regard to the goals of Hisense, Abraham says that the company aims to be named one of the top three brands in the next five years in the air conditioning category. The company aims to do this, he says, by offering innovative products, energy-efficient solutions and focusing on customer satisfaction, in addition to ensuring product quality, cooling performance and reduced downtime, all which will help in the company’s efforts to gain further market share. This, he says, is part of a brand’s evolution and part of its unfolding global narrative as a Chinese manufacturer taking on the global market. “It’s a journey,” he says. “You cannot build the Great Wall of China wall in one day.”