Camfil highlights the value of the World IEQ Forum 2022

STOCKHOLM, Sweden, 27 June 2022: One way to protect people from air pollution is to provide clean and healthy air inside of buildings, Camfil said through a Press release, dated June 27. This was the main conclusion at the 6th edition of the World IEQ Forum, held on March 16, in the Sweden Pavilion at the World Expo in Dubai, Camfil added.

The Expo may have concluded, but the topic of Indoor Air Quality (IAQ) still remains a mainstream concern that is discussed globally, Camfil said, adding that there were two reasons for the 2022 World IEQ Forum having had an extra focus on IAQ: 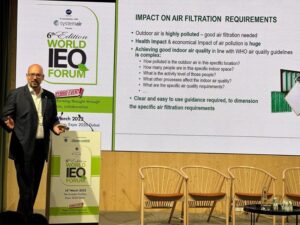 Further, a recent WHO study states that 99% of the world’s population lives in areas with too much air pollution, Camfil pointed out. Air pollution that is causing serious human suffering in the form of diseases and millions of premature global deaths yearly and, on top of that, substantial economic costs, Camfil added.

“In the North African and Middle Eastern regions, air pollution is responsible for 270,000 deaths every year at a cost of 141 billion US Dollars, according to the World Bank”, Zimmer said. He went on to point out that most people today spend 90% of their time indoors and that the simplest and best way to achieve protection against harmful airborne particles is to invest in efficient air filtration solutions across all buildings.

At the same time, Zimmer was careful to emphasise that it is not possible to have a same-solution-fits-all approach to cleaning the indoor air. “Consensus at the World IEQ Forum was that every solution has to be tailored to where the building is located,” he said. “The outside air quality must determine the solution you have inside.” For example, he added, what works in a temperate zone might not be right in regions with high humidity. “The needs can also vary within a region,” he said. “Cities are more afflicted when it comes to air pollution than the countryside. Some cities are more polluted than others.”

According to Camfil, the World IEQ Forum is an opportunity for experts on IAQ, like Zimmer and his colleagues, to engage with, for example, representatives from the Ministry of Health and other influential representatives from various countries. “It is imperative that we continue to raise awareness around the urgent need to protect people from air pollution,” Zimmer said. “When you look at the human and financial costs on a global level, it is evident that we can’t afford not to protect ourselves.”

Zimmer said participants at the World IEQ Forum did not just talk about the importance of healthy IAQ. “We also demonstrated proof of concept by measuring the outside and inside air at the location during the EXPO,” Zimmer said. “Dubai’s outdoor air was 10 times more polluted than the WHO recommendations. The air inside the air-filtrated Sweden Pavilion was well below WHO limits for particle concentration.”

Zimmer said the effect of the clean indoor air in the Sweden Pavilion was visible to the naked eye. “After several hours of listening to me and other speakers, the audience was still fresh and alert,” he said. “So, you could say that we certainly ‘walked the talk’ when it comes to proving the benefits of clean, healthy and productive indoor air.”