MILAN, Italy, 19 April 2022: District heating systems could be a key technology in achieving the international climate mitigation goals, both those laid out in the Paris Agreement and the more stringent ones set by the European Green Deal. Saying so, Frascold, which manufactures semi-hermetic compressors for the industrial refrigeration and air conditioning sectors, said it has combined with Solid Energy, which specialises in heat pumps powered by renewable energy sources, to contribute to the diffusion of district heating and pave the way to an ecological transition by signing up to numerous projects in Denmark. 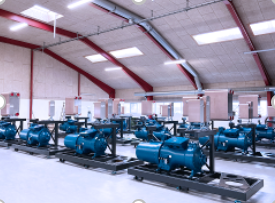 Amongst the most recent partnerships, upgrading the Galten plant in the Scandinavian country stands out, Frascold said. The plant has been in operation since 1964 and is capable of powering approximately 2,130 homes, Frascold highlighted.

The collaboration between Frascold and Solid Energy for the Galten facility began in 2019 with the creation of a system able to produce 45,000 MWh per year, obtained from 6 Frascold CXH screw compressors, suitable for use with HC, for 3.5 MW of overall power. The subsequent expansion, in 2021, saw the addition of 12 CXH compressors for an increase in power of 7 MW, Frascold said.

The installed air-water heat pumps absorb heat from the outside air with 34 air coolers for a total of 3,215,000 m3/h and cover 98% of the district heating system’s power consumption – that is, 44.343 MWh – with a SCOP (Seasonal Coefficient of Performance) of 3.11, Frascold said. The plant provides a discharge temperature of 70 degrees C with a return of 38 degrees C, thus achieving a COP of 3.4 calculated by considering an outside air temperature of 8 degrees C, which is the annual average in Denmark, Frascold said.

So, for this project, we relied, once more, on Frascold, which has supported us throughout each phase, and thanks to the constant dialogue with the Competence Center team, we have designed the ideal system to respond to the three challenges: Sustainability, performance and efficiency.

The partnership with Frascold is also based on the certified reliability of its wide range of hydrocarbon solutions: It is, in fact, the only manufacturer on the market with compressor sizes around 1,000 m3/h, which are perfect for our project and comply with ATEX directives for use in zone 2.” 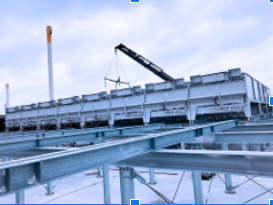 Fabrizio Diotallevi, Frascold Sales Area Manager, North Europe, said: “Denmark is one of the most advanced countries in terms of district heating, and approximately 1.7 million homes, or 64% of the total, are powered by these systems, of which 61% already use energy from renewable sources.

A continuous improvement process is in line with the objective to completely eliminate fossil fuels in the segment by 2030. With the numerous plants brought online with Solid Energy, we are proud to contribute to this ambitious project, which we hope will be replicated in other countries.

This new success story with Solid Energy is another example of our expertise in building heat pump compressors, which we have gained through years of international partnerships using this technology that, in the near future, will be the basis for virtuous heating and zero environmental impact.”

Frascold is a leading player in the development, production and marketing of semi-hermetic, piston and screw compressors, at the service of the refrigeration and air conditioning industry. A company in continuous evolution, with its gaze always directed toward the future, which has built, over time, its competitive positioning on the value of the dynamic efficiency paradigm in which the company becomes the very engine of change, playing a propositional and proactive role towards the demand.

With headquarters in the province of Milan, in a facility occupying 53,000 m2 in total. Frascold Spa closed 2020 with a consolidated turnover of 55 million Euro. The Company boasts a well-balanced competitive position, thanks to the complete control of the value chain and a careful internationalisation strategy, which is expressed in significant investments in direct bases in China, India and the USA and agreements with Distributors in 86 countries.

Solid Energy A/S is a cleantech company founded in 2015 in Denmark. It specialises in designing and installing heat pumps for district heating power stations and for large plants in, for example, the industrial sector. Solid Group has 35 employees and implemented 13 turnkey projects, for an overall total power of 40 MW.