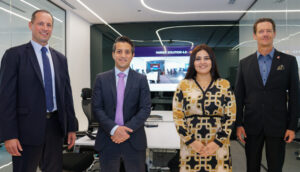 Making the announcement through a Press release, Farnek said that through its 5G and Wi-Fi 6-enabled, operational ‘nerve centre’, it will be able to take advantage of increased bandwidth, ultra-low latency and enhanced security, to connect assets from multiple sites, so that they can be centrally monitored and managed.

This, Farnek said, will allow it to rollout connected and transformative applications of technology that not only uplift the face of FM digitalisation but also offer enhanced efficiency. This is achieved through the concept of a digitally connected workforce and customers, to its in-house stream of technically advanced and cost-effective solutions, utilising the Internet of Things (IoT), Cloud, Machine Learning (ML) and Artificial Intelligence (AI) based technologies, amongst others, the company said.

Following a tour of Farnek Village and the inauguration of its command and control room, H.E. Frank Eggmann, Consul General of Switzerland to Dubai said: “I was particularly impressed with the innovative approach Farnek has taken by developing its own in-house ‘Swiss made’ technology. Equally impressive is the way this is being utilised, which will not only improve cost-efficiency but also has staff welfare and sustainability at its core. This is an excellent example of Swiss state-of-the-art technology at its very best.”

According to Farnek, beyond operational efficiencies and sustainability, its HITEK solution 4.0 will save its customers significant amounts of money. The company said it has estimated that it can save up to 17% in manpower costs after traditional FM operational management has been transferred to HITEK’s smart management.

In addition, through IoT sensors, there is also the massive benefit of predictive and proactive maintenance, which can reduce downtime and improve the lifecycle of assets, facilitating remote monitoring with a fully connected and mobile workforce, Farnek said.

Markus Oberlin, CEO, Farnek, said: “In the case of manhours, a centralised system can manage multiple sites, whereas operating a traditional Building Management System (BMS) could well require a series of operators in each building. In addition, they may not be experts in every aspect of facilities management and probably will not have the advantage of benchmarking property performance.”

Oberlin said: “As the technical specifications of 5G continue to evolve and expand that will capture and encourage even more advanced IoT and AI applications, which could start to become a reality, next year. So, we want to be ready to capitalise on these market opportunities, just as soon as the technology and connectivity is available.

“It is certainly going to take remote FM work to a whole new elevated level, enabling technicians to carry out tasks in either virtual reality or augmented reality environments, which are absolutely ideal for training purposes as well.”

According to Farnek, standalone 5G deployment consists of user equipment – the RAN and NR interface – and the 5G core network, which relies on a service-based architecture framework with virtualised network functions. Network functions that usually operate on hardware, become virtualised and actually run as software, the company said.

“Until Etisalat and Du are able to build out the independent infrastructure needed for 5G, our approach uses a combination of 5G Radio Access Network (RAN), 5G NR interface, and existing LTE infrastructure and core network to provide a 5G-like experience.”