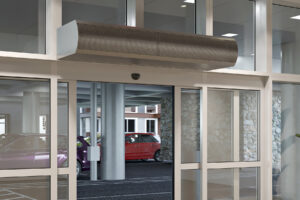 New Castle, Pennsylvania, 11 August 2020: Berner has developed the PureAir Package, an air purification system for air curtains to help buildings combat the COVID-19 pandemic while supporting sustainability goals, the company said through a Press release. The Berner PureAir Package complements the built-environment’s indoor air quality (IAQ) and disinfection efforts by deactivating viruses, killing bacteria, and neutralising a space’s airborne volatile organic compounds (VOC), as well as allergens and other biological contaminants such as mould spores, the company said. This is the industry’s first air curtain to include needlepoint bipolar ionisation (NPBI) technology, enabling users to safely disinfect and purify the air in the space, beginning at the doorway, the company claimed.

During periods when the door is open, the air curtain operates as both an air curtain and an air purifier.  When the door closes for longer than 60 seconds, the air curtain automatically transitions to Pure Mode for continuous NPBI ion distributio­­­n throughout the space with one of its lowest, quietest speeds, the company said. The Pure Mode setting distributes a minimum­­­ ion density of 787 ­­­ions/inch2 (2,000 ions/cm2) within a minute for reliable pathogen disinfection of the space, the company added. On Pure Night mode, to provide optimum ion density, the air curtain runs at a powerful high speed, de-stratifying the air in the room and purifying it prior to occupancy periods, the company further added.

The Intelliswitch, a programmable digital controller, which has a time clock, time delay, built-in thermostat, 10-speed fan control, and other integrated customisable features, can also be operated wirelessly through the Berner AIR, an advanced control technology communications platform for air curtains, the company said. The platform uses a wireless controller, encrypted at the processor level, to connect the Intelliswitch to the Berner App for smartphones, which also allows Berner factory technicians to help local contractors troubleshoot service, the company said.

Air curtain technology is ideal for NPBI, because air curtains are used right where customers, patients and employees, to name three, enter and exit a building, the company said. The air curtain, the company said, distributes ions from inside the space, starting right at the entrance, for an immediate effect, and it tirelessly replenishes the supply, as old ions reach their minutes-long lifecycle.