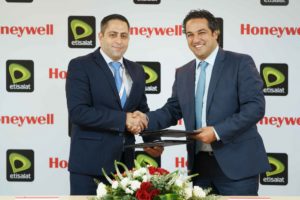 The agreement, signed in the presence of executives from both sides during an official ceremony on January 19 at Intersec 2020, will see Honeywell deploy advanced Internet of Things (IoT) software and hardware solutions for the new City Operations Centre (COC), as part of Phase 1 of the project, the company said through the release. Honeywell further said it will provide the IoT platform underpinning the central COC platform that will enable data analytics, a city-wide management dashboard, smart city services citizen engagement portal and mobile application capabilities. This will support administrative functions and deliver smart city services for citizens, as well as public- and private-sector entities in the new capital, the company said.

“Leading Egypt’s most ambitious development project to date, ACUD is committed to leveraging innovation as well as services to deliver a smart city based on the principles of safety, security, productivity and sustainability. We are glad to be building on our existing relationship with Honeywell through this collaboration and are confident this takes us one step closer to achieving our vision,” said His Excellency General Eng. Ahmed Zaki Abdeen, Chairman, ACUD.

Added George Bou Mitri, Vice President and General Manager, Honeywell Building Technologies (Middle East, Turkey and Africa): “At Honeywell, we are proud to be at the forefront of developing smart city infrastructures around the world, and Egypt’s New Administrative Capital is an example of global excellence in action. This project will redefine smart living in line with the national economic development objectives outlined by Egypt Vision 2030. The partnership with Etisalat will deliver innovative, connected technologies to improve the safety, security, and energy efficiency for the new capital, unlocking long-term benefits to its populations.”

According to the release, Honeywell technology will also power advanced management systems for smart parking and smart utility services for electricity, water and gas. This will include street lighting, smart metering, smart grid monitoring services and integration with smart digital signage management, billing and financials systems. In addition, the technology deployed will include Honeywell’s latest cyber-proof services, the company said.

According to the release, Egypt’s new capital, one of the world’s largest smart city projects, is being built in three phases 45 kilometres east of Cairo and will expand to cover more than 700 square kilometres once complete.

According to the release, the partnership with Etisalat is an extension of Honeywell’s scope in the New Administrative Capital. In February 2019, Honeywell in collaboration with MTI, announced it will deliver city-wide security and surveillance systems for ACUD. This effort will integrate security systems across the capital into a single point of control, known as an Integrated Command and Control Centre (ICCC).

Hazem Metwally, CEO, Etisalat Misr, said: “We are proud of this collaboration, as it demonstrates Etisalat’s leadership in the Egyptian market and our ability to support strategic national projects. It represents a path towards the overall development of the Egyptian economy and is in line with our strategy to provide integrated solutions and services across the telecommunications sector.”