DUBAI, UAE, 19 September 2019: Johnson Controls has launched the YORK YZ magnetic bearing centrifugal chiller to its Middle East customers, the company said through a Press release. The YORK YZ delivers up to 35% annual energy savings, reduced maintenance costs and is optimized for ultimate performance with a low-GWP refrigerant, the release quoted the company as saying. The cooling capacity for the Middle East units ranges from 165 to 1,350 tonnes of refrigeration (580 to 4747 kW), the release said. 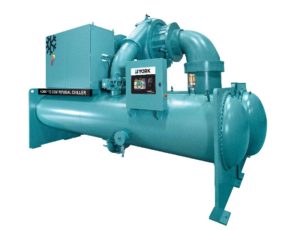 “With the launch of the YORK YZ chiller, we are proud to be delivering another industry-leading chiller to meet the demands of our customers in the Middle East,” said Claude Allain, VP and GM – Building, Technologies and Solutions, Middle East & Africa, Johnson Controls. “The extreme dry climate of the region presents a variety of cooling challenges. Coupled with the success of magnetic bearings in the region, the operating range map of chillers for the Middle East makes the YORK YZ an ideal choice for a variety of application needs in the Middle East.”

According to the release, since its initial launch, in 2018, the YORK YZ has made a significant global impact, capturing top honors in North America, China, Europe and Australia. The YZ chiller, the release said, was named 2019 AHR Innovation Award winner in the Cooling category. The success of the chiller, the release added, has already been seen in the Middle East, as the first YORK YZ project has been sold in the region. Globally, the release further added, this is the second largest YZ project sold to date and will be installed later this year.

According to the release, the YORK YZ is the first chiller fully optimized for ultimate performance with a next-generation low-global-warming-potential (GWP) refrigerant – R-1233zd(E). Chosen for its efficiency, safety, availability, low environmental impact and cost, the non-flammable refrigerant has an ultra-low GWP of 1 and is readily available from refrigerant manufacturers, the release quoted the company as claiming.

The YZ chiller, the release said, can deliver significant energy savings and lower operating costs by taking advantage of the off-design conditions, where chillers operate 99% of the time. The YZ chiller, the release said, operates with entering condenser water temperature as low as 40°F (4.5°C), providing enhanced performance in every operating condition and the widest operating envelope in the industry. The YORK YZ, the release added, uses an optimized single-stage design to provide industry-leading, real-world energy efficiency.