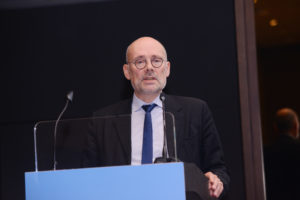 DUBAI, UAE, 6 August 2019: India has set very ambitious goals in the renewable energy sector, said Frederic Claux, Head of Assets, Engie MESCAT, and board member, Tabreed, adding that the positive momentum relating to renewables is largely driven by the government, which has been proactive in launching tenders.

Claux was sharing his observations in view of Engie’s strong activities in India’s renewable energy sector, working on solar and wind. “We have been bidding over the last few years on wind and solar projects to the point that we reached 1.5-gigawatt of capacity,” he said. Claux added, however, that as the country looks to diversify its energy mix, “the best energy is the one you don’t use”. As such, he said, energy efficiency is high on the agenda of policymakers. “I’m sure they have this in mind when drafting these polices,” he said. “They are aware, they understand the need and they are taking the right steps – the direction is set.”

Owing to growing appreciation for energy-efficiency initiatives, Claux said that the company sees strong growth potential in India for District Cooling. “New cities are being developed, which gives the possibility to plan infrastructure with the inclusion of DC from day one,” he said. “This means installing plant, chillers and a distribution network from the outset.” Claux said the benefits of District Cooling is especially amplified in big cities, where density is high.  “Density allows you to optimise the load,” he said. “You can’t install District Cooling networks in a low-density area. You need cities, you need density.” Speaking on any potential bottlenecks for acceptance, however, Claux said the only concern is related to cost. “To implement District Cooling, the investment is greater than cheaper, short-term options, but the longer-term benefits are what matters more,” he said.

Claux pointed out that with India being such a huge and diverse country, with big differences between urban and rural populations, the levels of awareness about the environment and building policies reflect this diversity, as well. While District Cooling has strong potential across the country, he said, it is still largely a niche market.