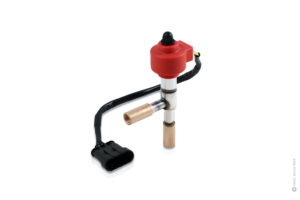 Announcing the launch of the valve through a Press release, the company said the goal of reducing the environmental impact of refrigerant gases and the consequent interest in CO2, combined with the desire to reduce the costs associated with this technology, drove the development of a new generation of high-performance components. The new E2V-CW family, featuring copper fittings, has been developed as the evolution of the previous series of high pressure valves, the release said.

E2V-CW is installed by simply braze-welding the special copper fittings, rather than the more complex and expensive welding techniques required for stainless steel, the release said. This installation simplicity further lowers the barriers to the use of CO2, and allows OEMs of Hecu and Heos condensing units to optimise their line assembly processes using K65 copper pipes, the release said

According to the release, the E2V-CW uses modulating equipercentile control, guaranteeing the utmost accuracy and a rapid response in the control of refrigeration systems. This feature is common across the entire range of CAREL ExV valves, and ensures extreme precision at low-cooling capacities and a fast response to sudden variations in load at high capacities, the release said. It is the only efficient solution for circuits with an extended range of modulation, the release added.

The E2V-CW has a stainless steel filter supplied as standard, the release said. Furthermore, a wide range of hermetic stators is available, suitable for any type of installation, the release added. Together, the release further added, these guarantee the highest reliability for any application, even in extreme conditions.