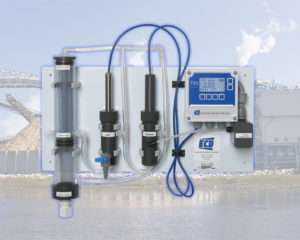 IRVINE, California, 27 August 2019: Plant engineers who’ve switched, or who are thinking about the switch, to ozone (O3) disinfection of water for high-temperature evaporative cooling towers will find that its reagent-less OZ80 Ozone Analyzer provides a green-friendly design that helps them optimize treatment while at the same time reducing cost, simplifying maintenance and avoiding complex environmental issues, Electro-Chemical Devices (ECD) said through a Press release.

The OZ80 helps ensure effective ozone treatment of cooling tower water to prevent bacterial growth, scaling and corrosion, the release said. Ozone as a disinfectant replaces the need for chlorine and other harsh biocides and inhibitor chemicals that are considered toxic hazards, and require special wastewater treatment and effluent monitoring, the release said.

In comparison to reagent-type analyzers that come with multiple components, which first must be installed and then require field calibration, the OZ80 Analyzer is factory-assembled and factory-calibrated, prior to arrival, the release said. All the technician needs to do is mount the panel and connect the drain lines, plug in the power cord and select the outputs on the display as 0 to 2.0 ppm for water disinfection or 0-20.00 pm for oxidation and bleaching operations, the release added.

According to the release, dual-range measurement of both ozone parameters also is available with the OZ80 Analyzer. O3 is a colorless to pale blue gas that, in low concentrations, gives off an irritating acidic odor. It is a strong oxidizer, stronger than either chlorine (Cl) or chlorine dioxide (ClO2), the release said. O3 reacts quickly and disintegrates into oxygen gas without the formation of harmful disinfection byproducts (DPBs) common to chlorine disinfectants that require additional costly treatment, the release said. It also increases the amount of oxygen in the water, the release said.

According to the release, the OZ80 Analyzer’s constant head flow control device (CFD) maintains the optimum flow rate moving past the sensor for sampling purposes. The CFD’s automatic flow control capability, the release said, eliminates the need for pressure regulators and rotameters, which are required by many other H2O2 analyzers to reduce system maintenance and lifecycle operating costs.  The minimum flow rate required by the CFD, the release said, is 10 gal/hr, and the maximum flow rate is 80 gal/hr, with the sample draining at atmospheric pressure.