Perspective: Individual to the fore

With few exceptions, energy-efficiency metrics for HVAC equipment are based on electrical-power input versus desired output. One glaring exception concerns fans. Most fan manufacturers provide only shaft input power and impeller speed. Of course, the electrical power needed to drive a fan (A) depends on the individual efficiencies of the rest of the system: transmission (B), motor (C) and variable-speed drive (D) (Figure 1). Electrical-power input is calculated by multiplying shaft input power by each of the efficiencies:

0.7457 = conversion of horsepower to kilowatts 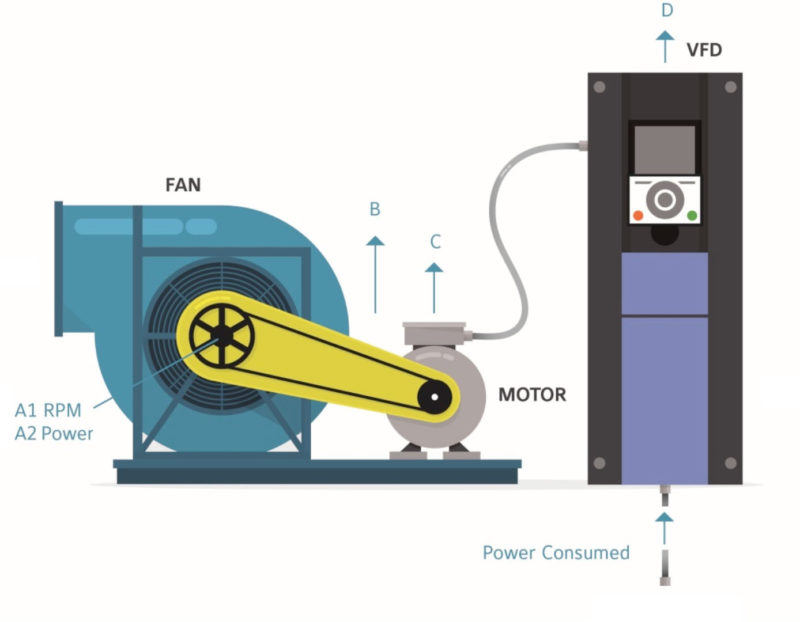 Historically, a significant problem for fan-system engineers was the lack of a standard method for calculating individual component efficiencies, which made reliable comparisons of systems nearly impossible (Figure 2). The dilemma was exacerbated by the growing popularity of integrated electronically commutated fan/motor/controller packages, for which a manufacturer can certify only electrical input power, forcing designers to try to compare apples and oranges.

ANSI/AMCA Standard 207 covers most conventional fan systems, starting with the familiar fan total or static efficiency and fan-shaft input power, based on fan airflow performance, tested in accordance with:

Transmission-efficiency equations are provided for V-belts, synchronous belts and flexible couplings. Direct-drive connections are considered to be 100% efficient. ANSI/AMCA Standard 207 assumes belts and pulleys are properly aligned and tensioned.

Motor-efficiency calculations apply only to three-phase induction motors within the scope of the Energy Independence and Security Act (EISA) in North America – that is, three-phase NEMA MG 1 Premium Efficiency general-purpose motors – and motors regulated under European and Chinese standards. This includes open-drip-proof and totally enclosed, fan-cooled (TEFC) motors from 1 to 500 HP. Other types of motors are explicitly excluded. Single-phase, 575-V and permanent-magnet motors are out of scope.

Speed controllers must be typical pulse-width-modulated variable-frequency drives (VFDs), programed to maintain a fixed ratio of voltage to frequency at or below synchronous speed. VFDs programed for constant torque control operate in a very different manner. Other characteristics defining VFD efficiency, such as carrier frequency and lead length, are assumed to be within typical operating parameters. Of course, if a system does not have a VFD, speed-controller efficiency is not part of the equation. 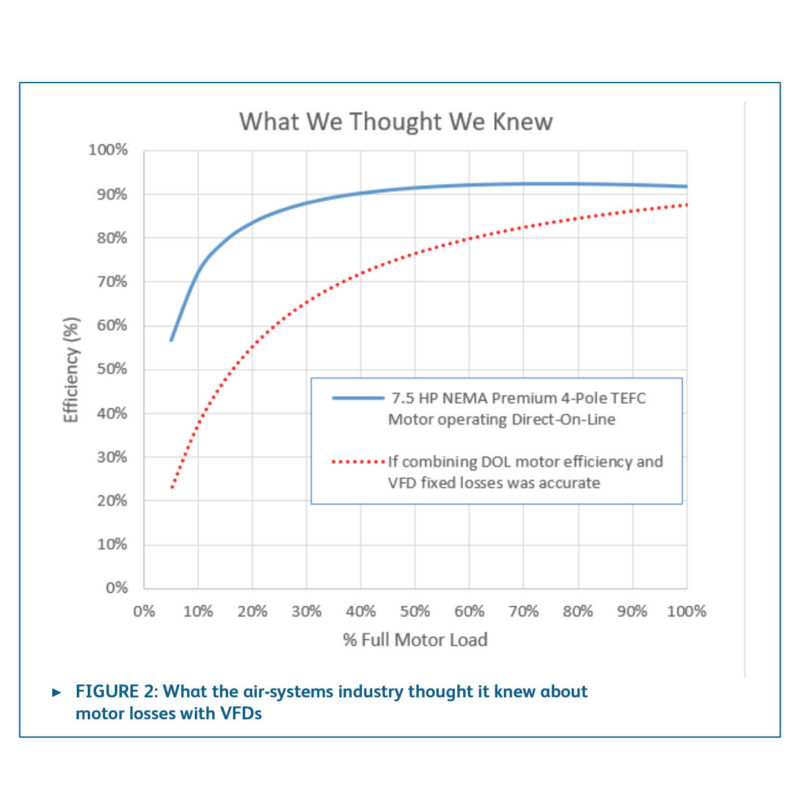 One of the greatest benefits of ANSI/AMCA Standard 207 is that much of what was previously “known” about part-load motor-system efficiency has been debunked. Consider:

Myth: VFD losses are 100% parasitic and constant over a motor’s output-power range, leading to huge inefficiencies at low load

Varying voltage with frequency maintains a constant flux and, therefore, a very flat efficiency curve for the motor itself. Further, VFD losses do not remain constant as load decreases.

Figure 3 shows that the difference in efficiency between a motor operating DOL and one operating in conjunction with a VFD is relatively constant over the range of motor output power. 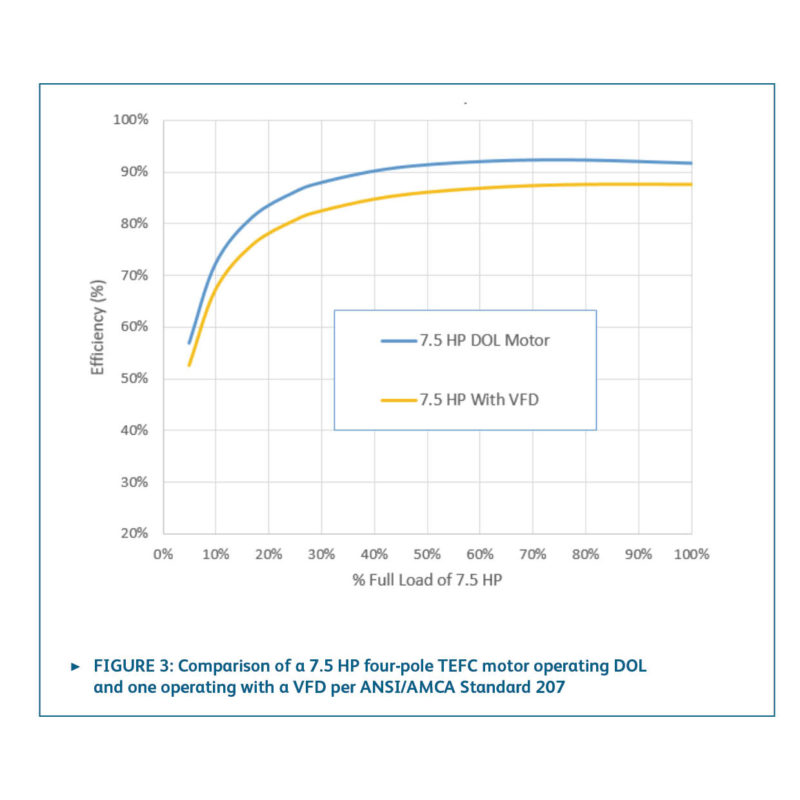 Myth: An oversized motor yields much lower efficiencies when the system operates at part load.

Fact: Concerns about part-load efficiency are valid when a motor is operated DOL. Surprisingly, though, when motors of different sizes are operated with a VFD, their efficiencies and power consumption are nearly identical.

Table 1 shows the power consumption of motor/VFD combinations of different sizes with a fan-shaft power of 7 HP (5.2 kW) at the air-system design condition. The difference in electricity consumption is slight. In fact, it is shown in table form, because a graph of the data looks almost like a single line. 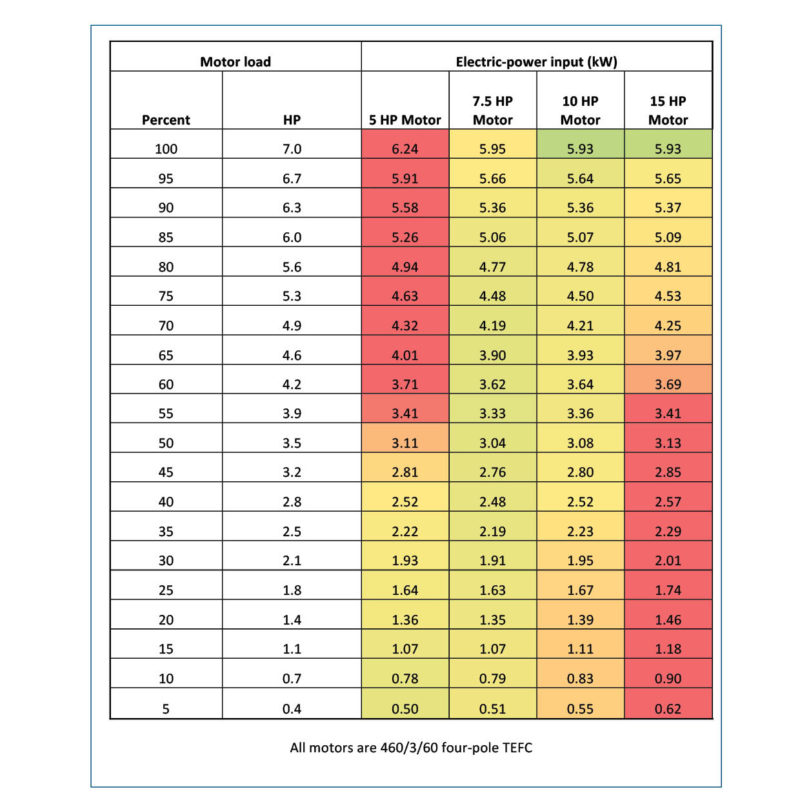 Designers would benefit through requesting AMCA 207 calculations from manufacturers

Until now, designers have had no easy way to compare the electricity consumption of different fan systems and, instead, have been reliant on general assumptions that do not always hold true. For example, contrary to popular belief, a high-efficiency, permanent-magnet motor does not guarantee lower power consumption. In the vast majority of fan systems, fan-impeller efficiency overshadows differences in motor/drive efficiency. In a typical system, the impeller accounts for 75% or more of wire-to-air power losses. A super-high-efficiency motor/drive system gains a few points of wire-to-shaft efficiency over a conventional system, but if its impeller is even only slightly less efficient at the intended duty, then all of the gains will be lost.

ANSI/AMCA Standard 207 will rapidly become part of everyday life in the fan world. It will be used by fan manufacturers to calculate fan energy index (FEI) (read Meet the new Fan Energy Index, https://www.hpac.com/industry-perspectives/meet-new-fan-energy-index). Not only will use of FEI be required starting with the 2019 version of ANSI/ASHRAE/IES 90.1, Energy Standard for Buildings Except Low-Rise Residential Buildings, the California Energy Commission has proposed a requirement that all fans sold in California meet minimum FEI requirements. Additionally, the Air-Conditioning, Heating, and Refrigeration Institute (AHRI) is in the process of changing AHRI Standard 430, Performance Rating of Central Station Air-handling Unit Supply Fans, to require the reporting of electrical power input instead of shaft power input, with an option to provide a calculation, as per ANSI/AMCA Standard 207.