PARIS, France, 8 July 2019: A BSRIA report, quoting a French Heat Pump Association’s report that air-air AC/heat pump units had outsold condensing boilers, said that the French AC market is on an upward trajectory. The projection, BSRIA said, is in line with its 2018 estimate that the market for ducted and non-ducted single splits, multi-splits and VRFs had increased to 589,000 units, as opposed to condensing boilers, of which 532,000 units were sold.

This is a very important milestone for the air conditioning industry, which is fast being seen as the provider of a key building service, BSRIA said. Furthermore, the air conditioning sector is expecting a further sharp upturn in growth, with sales of air-air splits soaring to a record 700,000 units, BSRIA added.

With this objective in sight, BSRIA said, manufacturers need to expand their supply capacities, and distributors need to monitor and plan their stock levels to avoid repeating the mistakes of 2018, when stocks held by wholesalers were depleted, as the market experienced a period of high demand. 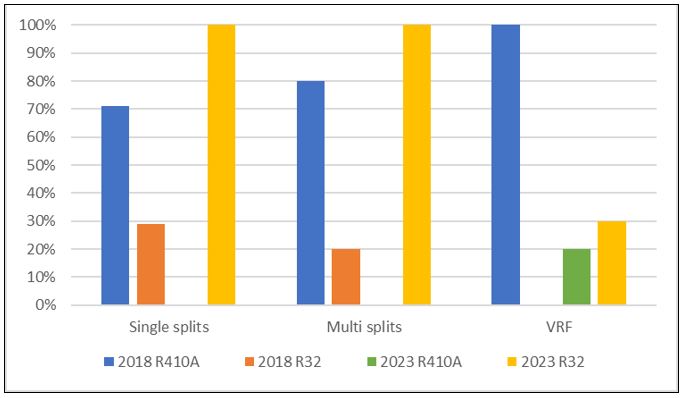 The use of refrigerants in splits

According to BSRIA, this rate of growth is having an impact on the level of HFC refrigerants in the market. BSRIA estimates that in 2018, about 880 tonnes of HFC R-410a were sold with splits and VRF systems. This includes the factory charge as well as the refrigerant charge in pipes, as part of the installation of each product, BSRIA said. This compares with 257 tonnes of HFC R-32, which is taking over in products, such as single and multi-splits, BSRIA said. For the moment, R-32 is used in France only in units below 5 HP, corresponding to about 14 kW of cooling capacity, BSRIA added.

Should sales of R-32 continue to grow at the expense of R-410a in 2019, BSRIA said, this would limit the impact that the growth in sales of air conditioning products could otherwise have on global warming.