Companies like Petra, Alessa and Zamil will be in AHRI committees

AHRI has over 300 members, and those companies produce 70% of the world’s air conditioning equipment, says James K Walters, Vice President, International Affairs, AHRI, to Surendar Balakrishnan of Climate Control Middle East, as he elaborates on the direction the certification body has set for itself to take, including unprecedentedly enabling companies outside the United States to be involved in committee discussions and voting exercises. Excerpts…
Added: June 17, 2019 | By: Surendar Balakrishnan 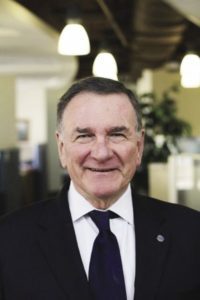 What are you doing to engage more closely with the industry and its needs?

In the 1950s, AHRI had one standard, and it had to do with unitary equipment. Today, we have over a 100 standards. We have 350 members, and we have over 40 committees, and each committee was called a section, and each section was a product type, be it unitary chiller or air handler. As the industry matured and developed, there were new sections added, because there was new equipment.

At the top of the organisation, the staff was growing, and we had a Board of Directors, which grew, and it’s all been very good, but the Board of Directors decided in the last two years that in order to keep AHRI agile, in order to properly hear and give a voice to an industry that has undergone great changes, we needed to reorganise how we did business, so that our process did not impede, going forward, having co-operation and being effective. So we’ve taken those 40 product sections, if you will, and are moving into four categories in air conditioning, heating, cooling and unitary applications, and each one of those sectors is still responsible for developing standards, certification programmes and technical work, but on an increasingly inter-disciplinary basis, where the related other sections are all in the same room, as opposed to having one meeting to another, sequentially, which you can’t do. So, you put them in the room together, and on top of that, our leadership councils for each of those four. The leadership councils are business leaders, who will help the sector shape the priorities, so it’s a combination of developers and is intended to integrate more smoothly the understanding of our members and our own strategic and business goals and to be able to support them technically, politically and statistically with our programmes. So, we’re trying to close what we thought was becoming a long gap between strategic thinking and the detail of doing the other work.

It’s a very big job, because literally 100s of volunteers from the company are involved. We intend to finish this. In November 2018, the Board of Directors abolished itself and re-constituted itself as 15 members versus 72 members. And by November 2019, we intend to be operating along the new path. At the same time, the current Board of Directors is not saying, ‘In November (2019), we’re finished’; if something isn’t working, we’ll make it work. We will change what has to be changed, because the Board and members understand that they are undertaking a substantial re-organisation in terms of structure. And there are many things done in our first effort that need to be refined, and to me, that is very important, because I’ve certainly been through many re-organisations, and historically there’s going to be re-organisation, when the re-organisation is finished. In our case, we’re ready to say, ‘That’s it, but if things are still not going well then we will change it’, which is a very healthy attitude, and I am very pleased about it. I think the members are, too, and the members have been engaged, instead of having technical working groups that go on and on. They will be formed and dissolved once the project is done, so it’s less cost to the members.

We will have a refined mailing list, so you can imagine how many addresses we have with our current structure. So, our companies will be working to distribute things within their companies even more effectively than they do now. People will have more up-to-date information. And from a global point of view, one change that I am very happy with is that we’ve changed our by-laws, according to which a company many not sell products in North America but can become a member of the AHRI, and serve and vote and comment and develop AHRI standards and certification programmes. In the Middle East, we have excellent companies, like Petra, Alessa and Zamil. All these companies no longer have to wait for what we say; they are going to have a chance to have their say, because they’re going to be on committees. They’re going to be involved in voting. That’s quite an astonishing development!

When will you firmly unfurl this approach?

It’s in, and it’s done. I am talking with companies here. The thing I like about it is that the manufacturers here bring to the table experience, ideas and thoughts that may be unique to this area that we might not even know about. We can make a provision for those, as we always revise the programmes and the standards. That kind of input and their ability to vote for that or not to vote for that is an important development. They can now say, ‘Now, wait a minute – it’s not going to work here. That’s progress.’

So, would you say you are respecting the fact that ambient conditions are different here, and so equipment need to be considered differently?

We are respecting the fact that our customers, despite the fact that they might not sell to North America, have a greater voice in choosing their own destiny with respect to our programme. There’s no other certification body that does that, and I think that this is a great step forward.

You announced Aramena with great fanfare some years ago? Whatever happened to it?

Aramena is a project, and the project is still a concept. Priorities relative to the migration to new refrigerants and the growth of MEPS have required that we ensured that AHRI’s programmes are relevant. Instead of developing a chapter here, we simply want people here or in China to be part of the group. Now, the concept for Aramena was to form our own organisation here, and that’s still a good concept, but I think it’s going to have to be altered from its original plans. In the meantime, as AHRI, we have taken a position that it’s not about forming chapters but about letting the people who were out there be here inside the organisation. Period! They are not colonies, and they should have direct participation, and that does not mean that we can’t go forward with some local organisation, but it’s not going to be an organisation that has a great deal of expertise and not have a place to express it.

How do you read what Eurovent is trying to achieve here? They are using the word lobby, as in lobbying for the interest of the air conditioning industry here, so it’s one unified voice that would go to the government and would represent their concerns and their questions. Do you see that as a different model and approach?

I think that having created the membership model, it will allow the development of a local voice here, and that has the strength of being part of a major organisation, as opposed to just the chapter. So, I think that it’s very interesting to see where the approach Eurovent is taking goes. We certainly expect as AHRI to be in a position to bring our whole resources to providing the industry here with a creative and a strong voice, and it is a very significant difference. We both are associations, and we have a very long and rich history with them. Anything that helps co-operation and opinion here is good. We think the companies here will strongly benefit from being more in control of the tools of the trade, and the standardisation, certification and advocacy programmes. They won’t be isolated from the main branch; instead, they would be a part of the main body.

How is the work with SASO and ESMA progressing?

With SASO, we have developed programmes, where we have a very specific IT network with them. Equipment that’s been AHRI-certified arrives at their border, and the Society can quickly check the data that they have produced from testing the information. They don’t have to ask us. We have created this IT box, where all the data is located, and I would hope in the future that we are going to provide the same kind of service to other groups.

We are in the process of reviewing the ESMA proposed regulations. We have been working with ESMA for a long time, and we look forward to continuing to do that. AHRI believes strongly that it can serve as a neutral body. For example, we take no position on refrigerants, we are agnostic, and we don’t favour specific refrigerants. And we are in favour of MEPS. Energy efficiency is a huge area and larger as we move to the next level of refrigerants under our timeline. And some of them are more sensitive and that interferes with energy efficiency, so we are spending millions of dollars in research, and the information is going to be publically available. We are continuing our work on energy efficiency, and we want to be part of the system that allows a customer anywhere that buys any equipment to have the ability to meet the rules and regulations where it is being used. We have every interest in full disclosure, that’s why our website is public.

Is that able to address the vexing issue of misrepresentation of certification, do you believe?

I can say that I can presume so, but for it to help, we have to continue to well-inform regulators and consumers about the existence of the programme and that it’s open any time and that information should be shared. There is a common desire among our members to participate in our market at a level playing field, and that is important to the industry, and that is what motivates our programmes.

Surendar Balakrishnan is the Editor of Climate Control Middle East magazine, and Co-Founder and Editorial Director of CPI Industry. He may be contacted at surendar@cpi-industry.com