System can be used for hot water and space heating from photovoltaics on the market, company says
Added: May 13, 2019 | By: CPI Industry - Content Team

Neuzeug, Austria, 13 May 2019: The new power controller, AC-THOR 9s can control electrical room heating as well as water heaters up to 9 kilowatts of power linearly, Austria-based my-PV said through a Press communiqué. It controls three-phase heating elements or up to three electrical heat sources and can even supply several heating circuits and regulate them independently of each other, the company said through the communiqué. 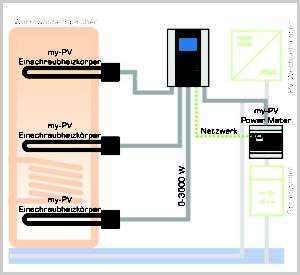 According to the communiqué, AC-THOR 9s opens up numerous new areas of application due to its high performance. For example, residential buildings with larger solar power systems can further increase their self-consumption by storing more heat. In addition, the communiqué said, the new power controller is ideal for use in agriculture, hotels and commercial buildings, where, for example, high-performance PV systems require a lot of heat for cleaning, manufacturing or wellness.